Deck Damage: Would Deck Repair Do or Not?

Is your deck missing a nail or is it severely weathered? While the boundaries are often close, it’s usually clear when it’s best to have the deck replaced instead of fixing its problems.

The 4 factors that define your decision: deck repair or replacement? 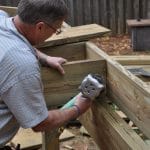 If we are talking about some nails missing or protruding, some stains here and there, or fading colors, go for deck repairs. When limited, deck damage can be fixed. The fading color is also a problem, if you consider that it indicates either old age or too much exposure to the UV rays. But this problem can also be fixed by staining the deck. Stains and debris can be cleaned. As a matter of fact, inspecting the deck annually gives you the chance to observe such problems and thus, fix them before things get out of hands.

Your decision is also influenced by the deck repair cost. If you are asked to pay quite a high amount for repairs – an amount that approaches the cost of deck building, it’s natural that you will go for a new deck. Then again, it’s highly unlikely that some small deck repairs will cost much, given that only small problems are worth fixing.

And then, it has to do with the deck’s age and current condition. If you have this cedar deck for a long time, you may decide to get a new one just to upgrade the backyard and before problems get out of control. If the overall condition of the deck is pretty good, though, and you have spent a lot of money for it, you may choose to replace some rotten boards and do some repairs, instead of replacing it.

Lastly, it has to do with your budget, your expectations, your current lifestyle. Perhaps, you won’t plan to spend this summer at home. Maybe, you don’t use the deck as much as before. In such cases, you don’t need to replace it just yet. 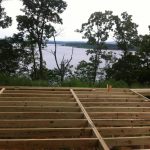 Even the strongest ipe deck will eventually wear. The question is how damaged it is to be worth the expense of the replacement! Well, when we are not talking about some loose deck railings, some rusty nails, and some warped boards that can be replaced, we are probably talking about problems that may affect your safety. We are likely talking about deck problems that won’t let you sit outdoors or at least, enjoy. And when the problem is related with the structural integrity of the deck and your family’s safety, the decision becomes easy. You need a new deck construction.

Which are the deck problems that cannot be solved – at least, not without spending a fortune?